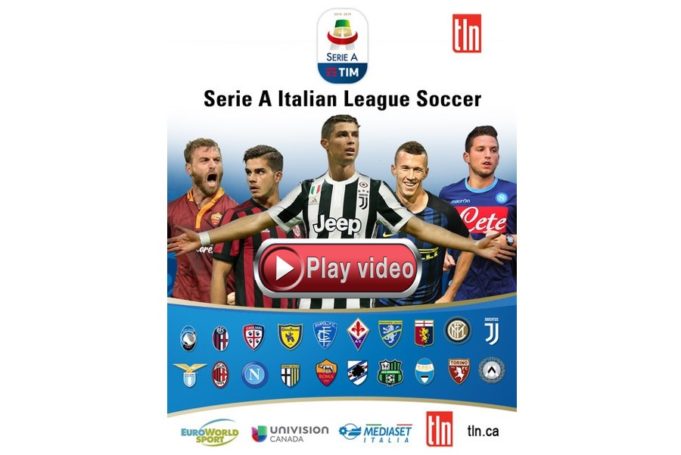 With the start of the new Serie A 2018-19 season just around the corner, calcio fans in Canada will be offered a third choice for watching Serie A with broadcasts on traditional TV. TLN Media Group acquired the TV rights to Serie A in Canada for the 2018-21 seasons.

This will give the calcio community more options, Serie A can now be watched on RAI Italia (with Italian commentary, naturally), DAZN streaming (English only) or TLN TV who will partner with Mediaset Italia to broadcast Serie A in English and also some matches in Italian.

While TLN has acquired the rights to show all 380 Serie A games, it will most likely show the main matches only.

The multi-lingual and multi-cultural channel also plans on offering some other calcio related programming in both French and Spanish.

Here is the official press release:

Under the agreement, TLN Media Group channels, as the official licensed broadcaster for Serie A in Canada will be able to offer full coverage of the entire schedule of 380 matches per season, as well as weekly preview shows, review programs, highlights and goals-of-the-week shows.

According to TLN Media Group President Aldo Di Felice, “TLN has a 34 year tradition of broadcasting the biggest soccer tournaments and leagues from around the world. For the next three seasons, TLN channels and platforms will be infused with the excitement of the world’s hottest soccer league. We are excited about the wide multicultural appeal of the league. With over half of the players coming from outside Italy, Serie A is a showcase of the world’s top talent.”

TLN Media Group plans to broadcast hundreds of live soccer matches with commentary in multiple languages including English, Italian, Spanish and French. “Off the field” programming will showcase the broader Italian lifestyle of which soccer is a big part exploring Italian cities, culture, food, music, celebrity personalities and gossip.

The season will kick off with live coverage of the debut match of the world’s best player, Cristiano Ronaldo, as his new club Juventus faces Chievo Verona on Saturday, August 18th at Noon/et.

First three weeks of matches on TLN TV and Mediaset Italia are included below.
Details and schedules will become available on tln.ca │ mediasetitalia.ca │univision.ca │euroworldsport.ca.