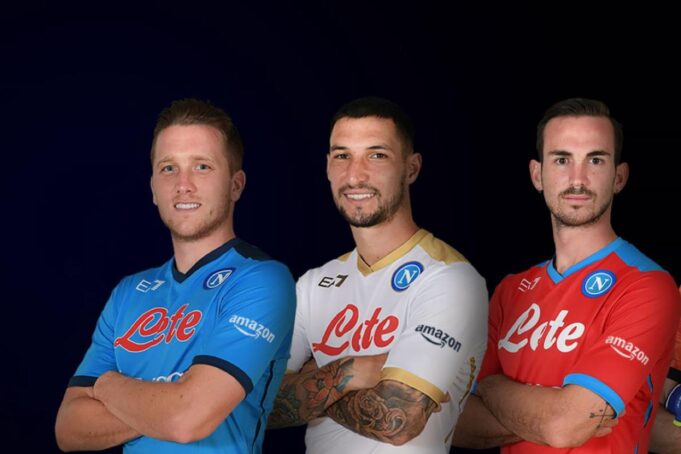 Amazon will be the Official Sleeve Sponsor of SSC Napoli starting from the 2021/2022 season. Starting from the match against Venezia – scheduled for Sunday, August 22nd – and until the end of the 2022/2023 season, the Amazon logo will be visible on the left sleeve of the light blue shirt that will accompany SSC Napoli in all the official Italian and international competitions.

Aurelio De Laurentiis, who has already started a collaboration with Amazon in Los Angeles and London for television productions, is honored to strengthen this agreement also in the sports field, commenting as follows: “It is a great pleasure for us to announce such a prestigious collaboration with a brand of excellence and global stature. With Amazon we have worked in complete harmony from day one, building a solid relationship and entrepreneurial partnership that can be extended in a profitable and happy way over time, aiming at common goals”.

Amazon, which is already e-commerce partner of SSC Napoli, has been offering all the fans of the “light blues” the opportunity to find official Napoli-branded merchandise on www.amazon.it/napoli since 2018. An innovative step, this one, which led SSC Napoli to be also the very first club in the world to open, two years ago, the brand store on Amazon, also landing on amazon.es, amazon.fr, amazon.de, amazon.co.uk, amazon.com, amazon.nl, thus providing an increasingly international know-how to the club that has been competing in the most prestigious European stages for 95 years.

The goal for SSC Napoli, together with Amazon, is to create activities aimed at celebrating the passion of their fans from all over the world while offering the right combination of innovation and internationalization.

“Listening to our customers and committing ourselves to offer them the best possible selection – as we know that many of them are real football fans – is an absolute priority for Amazon,” confirms Maria Giulia Biguzzi, Amazon’s Fans 360 Senior Business Manager.

“SSC Napoli was the first football club to work with Amazon’s Fan 360 project since its launch, thus providing fans around the world a fast and convenient way to purchase the official SSC Napoli merchandising. That’s why, today, we are really excited to take a further step forward in the collaboration with the club, by announcing the sponsorship of the SSC Napoli shirt starting from the next match, on August 22nd, at the Maradona Stadium.”

According to Serena Salvione, SCC Napoli Chief International Development Officer, “This new partnership is another important step that will confirm the international appeal of our brand and our approach to operate on a global level, as one of the top 20 football clubs in the world. The present agreement confirms the good relationship between Amazon and SSC Napoli, as we both aim to deliver fans everything they love about our club. This sponsorship is a further step to getting closer and establishing a stronger bond with our fans around the world.”