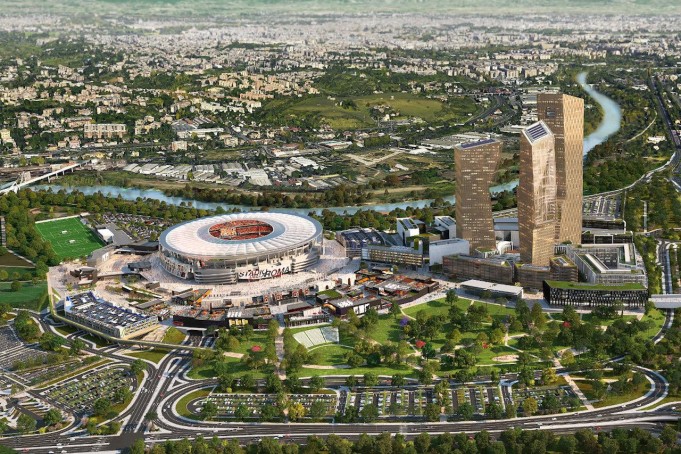 The saga of Roma and their struggle to obtain approval for a new stadium is now entering its final act. After years of discussions, debates, submissions and revisions, both the project’s supporters and the authorities are ramping up the rhetoric in advance of a final decision being made. Even the UEFA president, Aleksander Ceferin, has weighed in on the topic. “I’ve read a lot about Roma’s new stadium, but most of what I know has come from the media,” he said. “What I do know for certain is that if the stadium isn’t built then it will be a disaster, not just for Roma but for Italian football.”

Ceferin isn’t the only person who is wary about the effects of a negative outcome. “We expect a massively positive result from the meeting [with Rome’s mayor Virginia Raggi] on Friday. The alternative would be catastrophic for the future of Roma, Italian football, the city of Rome and future business in Italy,” Roma president James Pallotta warned via the club’s Twitter account. While the city squabbles over the archaeological importance of the derelict Tor di Valle hippodrome and the hydrogeological risk of building the stadium on the site (which will be reduced still further from its currently negligible state as a result of works that will be carried out as part of the project), the financial implications of Roma not having their own stadium are demonstrably clear.

Only three clubs in Serie A currently own their own stadiums: Juventus, Sassuolo and Udinese. The Bianconeri have an incredible record at the Juventus Stadium since it opened (they have lost at home just three times in the league since 2011), but let us look at the financial rather than the sporting impact. In 2010/11, their final season before moving into their new ground, their matchday revenue was a paltry €11.5 million, down 32% from €16.99 million in 2009/10. Since moving into the Juventus Stadium, matchday revenues have vastly increased, peaking at €51.4 million in 2014/15 (when they reached the Champions League final), while last season the Bianconeri posted matchday income of €43.7 million. Roma, meanwhile, brought in €28.4 million, and both they and Juventus are lagging a long way behind the big European clubs that they hope to rival in the Champions League.

A new stadium would certainly help Roma to start to bridge this gap, and from there other opportunities would grow. Clubs in the Premier League and Bundesliga have signed lucrative stadium naming rights deals, and it is very likely Roma would look down this avenue as well when (or if) they own their own ground. Although the Giallorossi have entered into various partnership agreements over the last few years, the club have been without a primary shirt sponsor since the €6 million-a-season partnership with Wind ended in 2013. It has been reported that part of the reason for the delay in agreeing a new shirt sponsorship deal is to tie it in with stadium naming rights, but, needless to say, without a stadium there can be no naming rights.

Moreover, the city of Rome stands to benefit enormously from the stadium being completed. The project makes provision for €450 million for public works, facilitating access to the stadium and regenerating the surrounding area. This €450 million will, according to a Professor of Economics at Rome’s Sapienza University, generate an increase of 1.5% in local GDP every year for nine years following commencement of the works, a reduction of 0.8% in unemployment (thousands of jobs created for both the construction phase and in the completed facilities) and a total increase in tax revenue of €1.4 billion. At least €30 million of this revenue will go straight into the city council’s empty coffers, and can then be spent on some of the city’s other stagnating projects. The risk of the project collapsing is not as low as many Romanisti would want. The political scenario facing both Virginia Raggi’s city government and the wider 5 Star Movement is a major factor in the process, but both from a business and a football perspective there is only one acceptable outcome. The construction of a new stadium has been fundamental to James Pallotta and his associates ever since they took ownership of the club, and if plans were to be turned down at this stage it could be hugely damaging. The effects would not be limited to Roma (who are already treading a Financial Fair Play tightrope), but potentially to Rome itself if the city was to reject an offer of private investment in the region. If M5S and its leader Beppe Grillo – who said that Tor di Valle is not a suitable location for Roma’s new stadium – stand firm, the financial implications for the city of Rome and the football club that bears its famous colours might indeed be, to use Pallotta’s word, “catastrophic”.