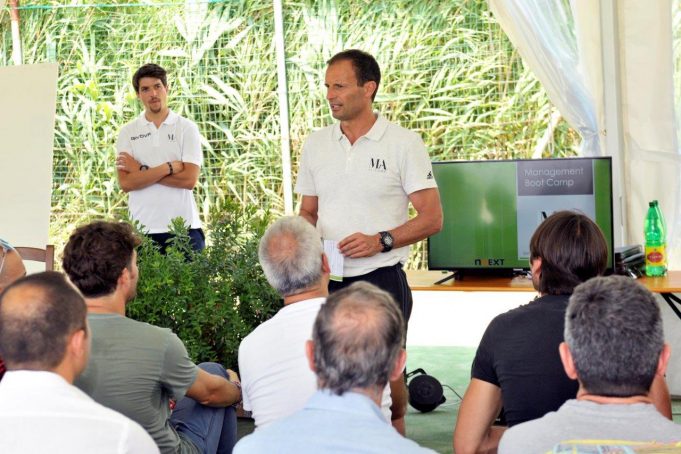 Although the idea of a coach being in effect a manager of the business is still a foreign concept in Italy, Juventus coach Massimiliano Allegri spoke to Calcio e Finanza in an exclusive interview about his managerial philosophy to create a winning team. The three-time domestic double winner (Serie A and Coppa Italia winner) discussed several topics that relate to managing a team off the pitch.

The soon to be 50 year-old coach from Livorno held his first “Mr. Allegri Management Bootcamp” where he shared his experiences to managers and entrepreneurs in his home city on June 17. This event dedicated to those in management and economics concluded the third edition of Mr. Allegri Junior Camp week, a fun football camp dedicated to teaching children about calcio and raising funds in benefit of social causes, in collaboration with Innext and Allegri’s managerial staff coordinated by Andrea Saule. Allegri defines himself as a “businessperson” – a term often with a negative connotation but in a positive light: “Football clubs are businesses and we are a part of it. Our job is to deliver results that in turn will increase the value of individual players. Being a businessperson means working within this optics.

“Today in Italy there is almost a phobia whereby a coach is responsible for the technical area but he must not be a manager – continues Allegri – however as a person working with the company sets the basis for success and therefore needs to know the economic strategies of the club and its goals. When I hear about strategies and talk about players coming and going, especially within the media, I understand that it tends to simplify things, however that is not always the case, the most important thing is to be realistic in analyzing and understanding the situations and this is our job. “ At the base of everything, Allegri identifies a relationship with the staff that must be built with a continuous exchange of information, with no subtleties and where the quality that he puts on the field is the art of command through delegation and trust.

“I have built an important workgroup of people who are very good in their fields, even better than myself. I am someone who delegates a lot because I do not have the ability to handle everything. After that, I remain the point of reference as expected but I do not intervene because I cannot decide for them. I have to be motivated by them to do better.

“From the first day with Juventus – he explained later speaking with managers and entrepreneurs – my objective was to create a network of communication between all staff members, from the physiotherapists to the doctors to the nutritionists to my direct coaching staff who prepare the training and work on the field. For me it is important that there is confrontation and exchange.”

Not only that, it is crucial that the warehouse keeper, the field clerk, all the people who are around the team have an open relationship especially with the coach.

“I am convinced – the bianconero coach says – that when you look at a team on the pitch you also see in part the state of the work and health of the team, because it is also from these details that you see if there exists team work that is well orchestrated together. Not just on the pitch. The scheduling of work is increasingly geared towards time scheduled to sponsors, TV/media, and other external constituents strictly on a sporting aspect.” Max Allegri, who has recently been in talks regarding his renewal with Adidas, and received interest by other companies in the sector who are naturally aware of such a central figure in Italian football like his, sees relations with sponsors more as an opportunity that as a necessity.

“The relationship with the sponsors – he says – represents the opportunity to improve the club and its economic future. Time management vis a vis TV and sponsors are part of this very different football than it was 30 years ago when the system was based on presidents who enjoyed owning a club.

“There is still some ignorance about this. In the sense of little knowledge of what our job is specifically, but personally I understand that the organization cannot ignore these moments that are an integral part of a season’s work and must be addressed with the same seriousness like all of our tasks.” Especially at this time of the year, above all the relationship with the club on the transfer market, Allegri explains:

Lastly, an explanation on the attitude when there are painful choices to make:

“In the past when important outbound transfers were announced, which weighed heavily on the management of the group, I was always realistic but never pessimistic. I believe that we must be in the capacity to bring out the good from the negative. That is why I have always worked by the club’s plans, while facing the ownership to make them aware of the realities on a technical level that, based on their choices, affects how the group can pursue, attain or fail achieving certain expected results. “