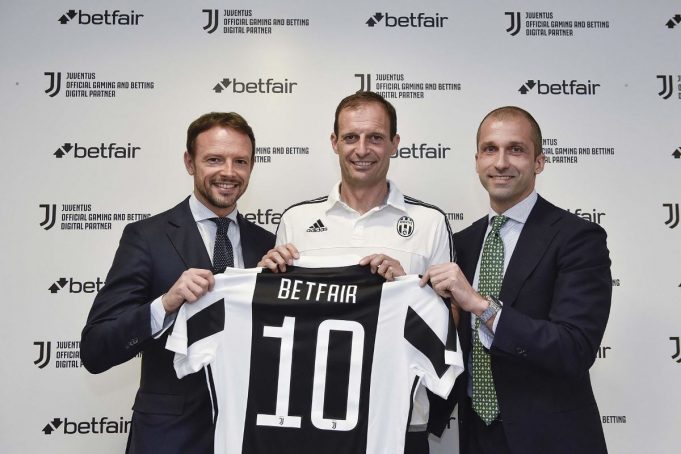 Juventus has announced the signing of a multi-year agreement with Betfair, making it the Official Gaming and Betting Partner of the Italian Champions starting the upcoming  2017-18 season.

Betfair is a leading innovator in the gambling industry and were the first brand to setup a betting exchange in Italy.

According to a press release from Betfair, the comprehensive partnership includes branding and visibility inside the Allianz Stadium and Juventus Training Center, access to the Juventus players for marketing and communication activities and use of the Official Juventus logo, with the term “Official Gaming and Betting Partner” in all Brand Communication activities.

Throughout this multi-year deal, Betfair will be developing promotional content and marketing activities for all the Juventus supporters, both online and on-field, including exclusive video content and prize giveaways that will give fans the opportunity to experience the emotions and matchday atmosphere from an exclusive venue in the Allianz Stadium and get closer to their on-field idols.

“We are very proud to announce this partnership with Juventus, which has in its DNA values and characteristics we think are winning in sports as well as in the business, such as prestige, leadership and ambition. We believe that this partnership can create great opportunities for our customers and for all football fans.”

“This Partnership is integral to the global strategy of Juventus by developing strong relationships and agreements with innovative brands such as Betfair, that are worldwide leaders in their industry.”

Financial details of the agreement were not disclosed. Betfair has been operating in Italy since 2008 and merged with Paddy Power in 2016, making it one of the biggest online gaming companies in the world. The new entity is now called Paddy Power Betfair.