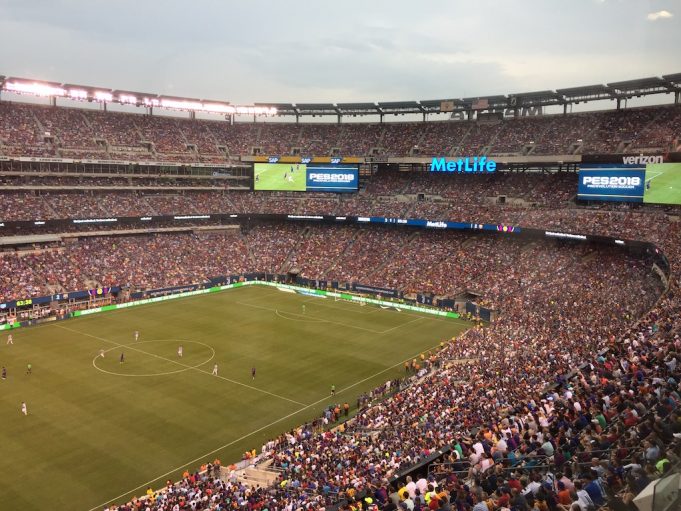 Five Sellouts and Over Half a Million Fans Attended International Champions Cup Matches in 2017, Including El Clásico Miami and Manchester Derby

In its five-year history, the International Champions Cup, which is organized by Relevent Sports, a division of RSE Ventures, has established itself as the world’s premier summer soccer tournament, hosting top-tier matches in iconic venues across the world. Stephen Ross and Matt Higgins created the International Champions Cup in a mission to promote and grow soccer worldwide and have since organized matches in the United States, Europe, Australia, China and Singapore since the tournament’s inception in 2013. This year’s tournament featured five sellouts with nearly 700,000 fans in attendance across the 12 matches taking place in the United States.

The 2017 International Champions Cup presented by Heineken® was headlined by the first ever El Clásico to take place in the United States and first outside of Spain since 1982. El Clásico Miami saw longtime rivals Real Madrid C.F. and FC Barcelona match up on Saturday, July 29, at the newly renovated Hard Rock Stadium in Miami. Hailed as one of sport’s all-time greatest rivalries, the rosters for each club featured some of the best players in the world, underscored by the fact that these two clubs currently hold the titles for both the Spanish La Liga and UEFA Champions League in each of the past three years. FC Barcelona claimed a 3-2 victory in front of a sellout crowd of 66,014 with goals from Lionel Messi, Ivan Rakitić and Gerard Piqué. As part of this momentous event, the ICC and El Clásico Miami management team and partners developed a program of exciting events leading up to the match including concerts, brand activations, club pep rallies, art activations, and more which were hosted in and around Hard Rock Stadium as part of an immersive experience site that was available to fans from Tuesday to Sunday. Additionally, El Clásico Miami week provided an opportunity for fans to experience the culture of Miami by creating events around Miami Beach, Wynwood and Bayfront Park. Casa Clásico at Bayfront Park was headlined by a triple header of matches including La Liga legends, Best of Miami and the FanJam celebrity match. The FanJam match featured the a matchup of celebrity coaches in Drake and Draymond Green and players including Lil Wayne, Terrell Owens, Jesse Williams and more. The ICC and Kith, whose founder Ronnie Fieg also played in FanJam, collaborated to outfit all players for the match.

The tournament kicked off with a thrilling match at Comerica Park in Detroit, Michigan. A near sellout crowd of 36,289 watched Paris Saint-Germain F.C. defeat Italian powerhouse AS Roma in penalty kicks, 1-1(5-3) in the first ever professional soccer match in the stadium’s history. The Manchester Derby headed stateside for the first ever match held outside of the United Kingdom with English Premier League powerhouses Manchester City F.C. and Manchester United F.C. meeting at NRG Stadium in Houston, Texas, to a crowd of 67,401. Starting together for the first time, Marcus Rashford and Romelu Lukaku each scored in Manchester United F.C.’s 2-0 victory over their crosstown rivals. Fellow English Premier League power Tottenham Hotspur F.C. began their tournament with a entertaining 4-2 victory over Paris Saint-Germain F.C. at Camping World Stadium in Orlando, Florida.

Over 60,000 fans watched Manchester United F.C. defeat Real Madrid C.F. in penalty kicks at Levi’s Stadium in Santa Clara, marking the ICC’s third appearance at the home of the five-time Super Bowl Champion San Francisco 49ers in as many years. Manchester United F.C. entertained a second consecutive sellout crowd when they met FC Barcelona at FedExField in Landover, Maryland. Over 80,000 fans, including President Barack Obama, watched as Neymar scored the match’s lone goal to give FC Barcelona a 1-0 result. Late that night, Kevin De Bruyne led Manchester City F.C. to a 4-1 victory over Real Madrid C.F. in front of a sellout crowd of 93,098 at Los Angeles Memorial Coliseum, the largest for a soccer match in the stadium’s history. Prior to El Clásico Miami, over 40,000 fans attended Hard Rock Stadium for Juventus F.C. 3-2 victory over French Ligue 1 champions Paris Saint-Germain F.C., watching Claudio Marchisio convert a penalty kick to earn the win. In Nashville, the match between Manchester City F.C. and Tottenham Hotspur F.C. at Nissan Stadium set the Tennessee state soccer attendance record of 56,232, surpassing the record previously set two weeks during the Gold Cup match between the United States and Panama two weeks prior. This competition between two English Premier League rivals ended in a 3-0 victory for Manchester City F.C.. The International Champions Cup closed with a match between two hugely popular Serie A clubs, AS Roma and Juventus F.C., facing off at Gillette Stadium in Foxborough, Massachusetts. Juventus F.C. went on to defeat AS Roma in penalty kicks, 1-1(5-4).

“The fifth year of the International Champions Cup was undoubtedly the most successful yet,” said Charlie Stillitano, Chairman of Relevent Sports. “The collection of clubs, matches and venues was unprecedented for a preseason tournament and we are thrilled with the results. Fans across the United States, China and Singapore showed their appreciation and passion for the sport by coming out to stadiums and supporting on their clubs over the past month. We look forward to continuing our mission to grow soccer in the United States and promote it worldwide.”

Relevent Sports is also proud to announce Daniel Sillman as its new Chief Executive Officer, effective immediately. Sillman was formerly the Business Development Director at RSE Ventures where he sourced, structured and executed on new investment opportunities and was responsible for ongoing management of RSE portfolio companies including acting as a strategic advisor and serving as a Director on multiple boards. Sillman helped plan and organize ancillary events surrounding both the Manchester Derby in Houston as well as El Clásico Miami including Casa Clásico.

Sillman and the executive leadership team of co-Founder Matt Higgins, Executive Chairman Charlie Stillitano and Managing Partner Jon Sheiman will build upon the success of the ICC by moving beyond match production and further solidify the International Champions Cup as the pre-eminent location-based entertainment business across industries. In addition to building the entertainment arm of the business, Sillman and the team will add to the current roster of ICC events including youth competitions, conferences, acquisitions and more. RSE Ventures, Relevent Sports and Ascendent Sports Group managed a strong portfolio of sponsors and partners for the fifth year of the International Champions Cup. For the second consecutive year, Heineken®was the presenting sponsor of the tournament.  In addition to Heineken®, the 2017 tournament featured a leading line-up of sponsors, including Ally, Nike, Orlando, Chevrolet, AON, Groupon, VividSeats, Gatorade, Beats By Dre, La Liga, Moët Hennessy and Xyience. All matches for the International Champions Cup were carried on ESPN networks including ESPN, ESPN2, ESPN Deportes and streaming network ESPN3, accessible through WatchESPN and the ESPN App. This year’s tournament was broadcasted in over 170 territories.