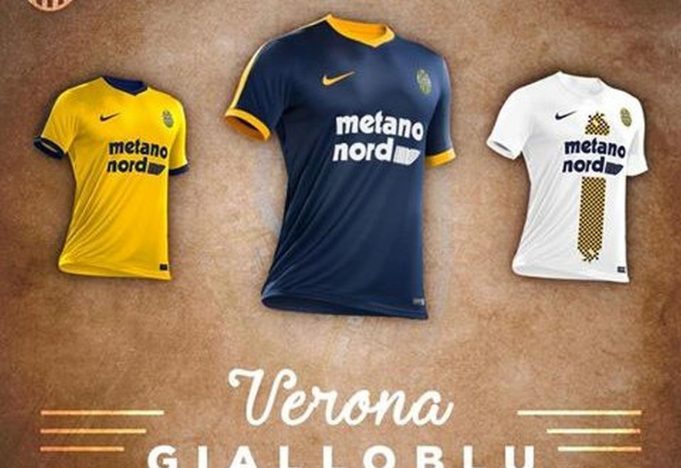 After a few troubled years, Hellas Verona returns to the Serie A and the club is purchasing several players with great skills in order to perform a great season.

Recently, Verona has renewed its partnership with Nike and the American company unveiled Hellas Verona’s 2017-18 kits.

There is no particular news for the first jersey, the one usually worn in home matches. For the fifth consecutive year, the American brand has decided to focus on a blue navy main color with yellow inserts, a way to match the social colors of the North Italian club.

The jersey presents a V collar surrounded by a yellow band which goes on the shoulders and on the rim of the sleeves as well. The Nike swoosh is yellow and the main sponsor “Metano Nord” is white. Behind the collar is written “Hellas”. The names and numbers of players will be yellow with a new rounder font.

There is no news in reference to shorts and socks associated with this jersey.

Hellas Verona’s 2017-18 away kit is practically identical to the one used during the past season. The away kit is very similar to the home jersey but the colors are inverted. The kit is complemented by yellow shorts with a blue vertical band on the sides. The socks are yellow as well.

Hellas Verona’s 2017-18 third kit is white. The collar is rounded, the Nike swoosh is black and the sponsors are blue navy. A series of squares forming a central vertical band passing through the kit feature Verona’s social colors.