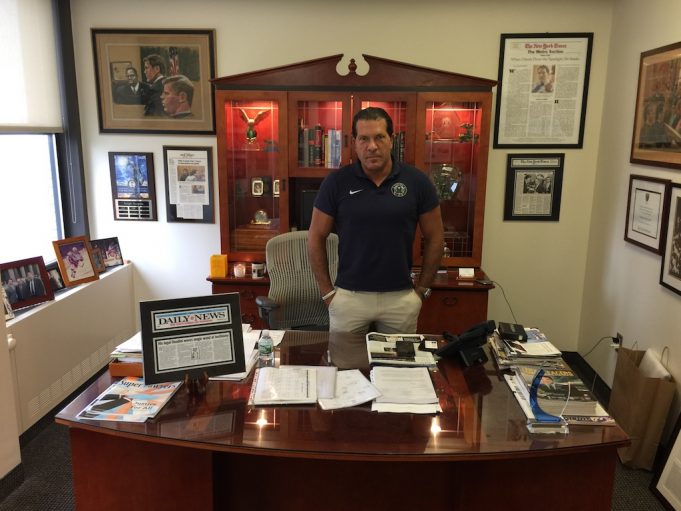 A successful Italian American lawyer with a great passion for soccer. Joe Tacopina opened the doors of his office in Manhattan (New York) to Calcio e Finanza to talk about his goals with Venezia and his commercial and sport strategies. Joe is a goal oriented professional, someone who understands where he needs to be because, “this is something really important in the world of football that is an environment full of pitfalls.”

A man with a strong will and great sense of confidence, values that he honed by working as a prosecutor for several years. Tacopina’s parents were born in Rome, “my father was Romanista and growing up in Brooklyn I was always exposed to soccer. I never forgot that growing up in that neighborhood I was consumed by the passion but then when I went to Rome, at the Olimpico stadium for the first time, it was something that I never experienced before in a sporting context. I was captivated by hearing the Curva singing for almost two hours and feeling the bottom of the stadium moving underneath my feet.”

Since that moment the American lawyer knew that he was supposed to be part of that environment. The strong and untouchable prosecutor felt a deep feeling of love, like a crack in his soul that made him think more and more about how to get there in the ‘Bel Paese’ and link his Italian roots with the passion for that amazing sport, soccer.

His persistency and business acumen led him to invest in AS Roma and Bologna before landing in his adored Venice because he was ready to relaunch his business model elsewhere.

This is the best moment of his career in the sports world. Venezia FC is a great reality and a futuristic project that Tacopina is leading with competence and wise commercial strategies.

Sometimes, the best thing to do is to follow the masters, those who are currently implementing the best techniques, Real Madrid. Joe is not shy to admit that he sees them as superior minds which create wealth.

“We are creating a global brand. Let’s say that 3% of our fans are from Italy while 97% are from around the world. Just like Real Madrid. They are the best in what they are doing. I bring my top managers to Madrid every year to understand how they work. Because they are the best in the world!”

Venezia’s president also analyzed the reasons why it is so difficult to implement modern facilities on Italian soil.

“The main difficulty to build facilities in Italy is the bureaucracy. In Italy most of the stadiums are owned by municipalities while the teams are just tenants. Every year you need to keep the stadium to modern standards but while the municipality has other things to spend the money on the owners don’t want to pay millions of dollars in a property that they don’t own. Stadiums in Italy are currently very old, not enjoyable, and without modern amenities people decide to watch a match on high definition tv rather than going to an uncomfortable stadium where you cannot see anything.

Now there’s the stadium law that came into effect in Italy. The Italian government funds a certain percentage of the stadium project. They subsidize 50% of the project on average, with a very low interest. They are doing this to incentivize teams to improve their facilities or build their new stadiums with which you cannot only increase your revenue streams but create a new model as a team.”

But in a system that seems to be broken and not efficient there is something that is appreciable too. Joe mentioned his great respect of the current mayor of Venice Luigi Brugnaro, a respectable person who knows the importance of Tacopina’s project for his region.

“Before I came, mayor Brugnaro agreed to give approval for the stadium project and he did it, he kept his word. He is a great mayor forward thinking. For Venezia this is a legacy project. It is one of the most important cities in the world.

We are going to build a stadium close to the airport, a  hotel, a commercial complex, and a small theatre. It will be something like a destination/location by itself. The Municipality will get a lot of money from it. We are going to spend a lot of money buying their land and the city is getting tax dollars from this development. We are also going to create jobs in the area. This project is a win-win-win all around and the mayor of Venice is aware of that. Things are moving quickly in Venice. We just got a green light on this project and we are very excited about that. We are looking forward to having our stadium open up in two-and-a-half years.”

Joe Tacopina knows what he wants. His career in criminal defense shaped his character giving him a great and engaging self confidence. Venezia FC is his creature, a jewel that will become even brighter in the next few years.

“We will become a giant of Italian soccer. I am not even questioning about that! It’s just a matter of timing. We will bring Venezia back to the top of the Italian soccer, where it belongs. If you think about every major city in Europe, they all have one thing in common, a major soccer team. Currently, Venice is the only one without it but this is going to change.

Building a global brand takes time but with social media and the ability to reach fans all over the world that time is much less than it used to take. We will be able to live stream training sessions and we will sell and deliver merchandising to China in a couple of days.

We are also expanding our academies around the world. Currently we have academies in Shangai, in County Cork (Ireland), here in New York City and we are expanding in Argentina and Peru. We have a very aggressive plan to put our name out there globally.

It’s not just a soccer team, it’s our name, this is the most special place in the world, the most unique and beautiful city in the world. 30 million people every year want to step on Venice and be part of it. When you have that advantage and you have that powerful name on your jersey it’s definitely easier to expand your brand.” In reference to the reform needed for Italian soccer, Tacopina highlighted that the most important thing is to diversify the sources of revenues. The Italian model is lacking in many aspects but he sees a change. According to him, the future of this sport in Italy will be brighter.

“Italian soccer is incredibly important. They have the fourth largest television rights contract in all sports. There’s the Premier League, the NFL, and then the NBA. Serie A is just behind them even more than MLB. There’s a great foundation to build around but you can’t just rely on that. Commercial revenue, media revenue, and game-day revenue should be about equal. If you are able to do so, you are in a great shape. The problem with the Italian soccer is that so far 85% are media rights and a very low percentage comes from commercial and game day revenues. That has to change and I see that something is currently happening.

I brought new owners into the Italian soccer, which purchased AS Roma and Bologna. I helped Mike Piazza to get involved in Reggiana and he is very excited about that project. I am constantly speaking to potential buyers for Palermo. I am also helping Zamparini who is constantly in contact with me. I believe in the future of  the Italian soccer. If experienced people come into this business bringing with them a North American business model, which is a much different model from the Italian’s, it is going to be great.

Let’s look at AS Roma, when we purchased the club it was an enterprise worth €110 million, but now it’s almost €500m, a huge increase in only six-seven years.

Increasing value and revenue streams is possible but you have to put the right people in the right spot to do so. Venezia has a unique revenue stream, we have tourism, this is a huge market for us.

Italian soccer will be healthy again and the situation is already improving but I would like to see that Italian people change their mentality about soccer. By investing in this sport it doesn’t mean that you’re putting a donation out there because sooner or later you are going to lose it. With the current advertising market, which is very different from that we had 30 years ago, you will capture revenue streams that people don’t think of.”

Americans like to think big and Joe Tacopina is not different. His enthusiasm is engaging but his actions are even more significant. To look good you have to think big and his Venezia FC is already a step forward.

“In Venezia we have Serie A level managers. It was important to me to prepare the club. I always say, “dress for the job you want, not the one you have”. When we were in Serie D I knew we were going to Serie A and I started preparing ourselves. My players are wearing suits and ties before the games, we have a private bus with the big Venezia logo, we are beautiful looking. Sometimes we were going to play in very small towns and people where thinking, “Hey these guys are lost! They are in the wrong place”. This is a mentality that I wanted to instill from the beginning and we will hopefully carry it on to the Serie A and even in higher competitions.”

Joe sees Venezia like a family because he created a supportive and respectful environment. He doesn’t like drama, he just wants to reach the best results.

Venezia FC’s future has never been brighter. When a savvy group of investors pick an iconic team hosted in a city that seems to be painted on an artist’s canvas the recipe is successful. Joe Tacopina is leading the rebirth of a legendary soccer club in the most incredible place on earth.

You can listen to the full interview by clicking the link below.